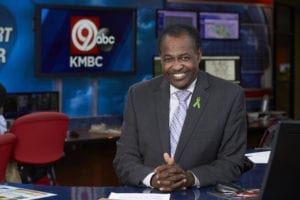 During his first year as a Green Ribbon Champion in 2018, Bryan Busby, Chief Meteorologist at KMBC-9 News, says he was continually amazed at all the people he met by chance in the community who had a Green Ribbon pin or wristband promoting awareness of organ donation.

Now as a seasoned and vocal advocate, Bryan is proud to continue taking part in the Green Ribbon Campaign with Midwest Transplant Network. He hopes to share the importance of organ donation with even more people — especially those who don’t realize that it’s possible to be an organ donor.

As someone with diabetes, Bryan wasn’t sure at first that he could be an organ donor. Then he found out anyone can join the donor registry, regardless of age or medical history. Now he wears his Green Ribbon pin almost every day as he forecasts the weather and tracks storms for KMBC-9 News. And he says his viewers are noticing, which gives him the opening to share the facts about organ donation during his numerous community interactions.

“That’s the first step to raising awareness and getting the conversation started,” Bryan said. “It’s a wonderful thing to use my voice and my reach to work for the greater good and help dispel any myths or misconceptions about organ donation.”

One of the most meaningful events for Bryan as a Green Ribbon Champion occurred at the third annual Legacy Walk at Berkley Riverfront Park. There, two families who were connected through organ donation and a heart transplant sought each other out and met for the first time. The mother of the donor and the mother of the recipient hugged, cried and then walked together as an “extended family.”

“There’s nothing more emotional than hearing the heartbeat of your loved one and knowing that it allowed someone else to go on with life.”

Watch Bryan’s story in the video below:

Together with Midwest Transplant Network and all the Green Ribbon Champions, Bryan Busby invites you to join your state’s organ donor registry and encourage others to do the same. Learn more about the types of donation, including the option to be a living donor, and the incredibly positive emotional experiences for organ donor families and transplant recipients.