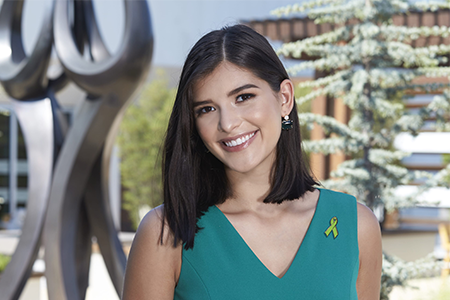 WESTWOOD, Kan. (Aug. 14, 2019) — One year after Midwest Transplant Network named Sophia Dominguez-Heithoff a Green Ribbon Champion, the 19-year-old University of Kansas student says she is only beginning to spread the word about the importance of organ and tissue donation.

As her connections noticed her familiar face around the Kansas City metro area, Sophia found opportunities to educate friends, family members and fellow students on donation facts. This type of advocacy feels personal to Sophia, whose preschool teacher received a lifesaving liver transplant many years ago and whose cousin provided lifesaving gifts to others as an organ and tissue donor.

“I truly believe one of the best ways you can make a difference in the world is through organ donation, and I viewed this firsthand through my cousin,” Sophia said. 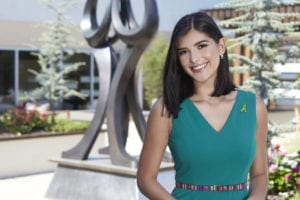 Since becoming a Green Ribbon Champion, she has received messages from many people in her life, including a friend’s mother, who — previously unbeknownst to Sophia — received a liver transplant 20 years ago.

“To think that if there had not been an organ donor who gave my friend’s mom her liver, my best friend would not be here today — that shows the sheer power of organ donation,” Sophia said. “I am very fortunate to be a leader for this cause.”

Organ donation reached record numbers last year in the community served by Midwest Transplant Network, with more than 800 organ transplants. Equally important is the number of people registered as organ donors – the first step in giving hope and sharing life for nearly 2,500 Kansans and Missourians on the waiting list for a transplant. Almost 171,000 people in Kansas and the western two-thirds of Missouri registered or renewed their organ and tissue donor registrations in 2018.

“We are very proud of the work our community partners did last year to encourage and promote organ and tissue donation,” said Jan Finn, president and chief executive officer of Midwest Transplant Network. “Advocates like Sophia remind us that no matter your stage in life, you can champion the lifesaving and life-enhancing gifts of organ and tissue donation. Support from Green Ribbon Champions Jeff Jones, Bryan Busby, Alonzo Jamison, and Sophia helped us reach more people in our community than ever.”

Anyone can join the donor registry, regardless of age or medical history. The process typically takes less than a minute and can be completed online at ShareLifeMidwest.com, or in person at the DMV when obtaining or renewing a driver’s license or ID card. For many, it’s a simple way to make a powerful difference. A single donor can save up to eight lives and improve as many as 75 more.

Still, many people may have misconceptions regarding the donation process or feel a sense of denial around these topics. Sophia says she has enjoyed educating her peers and others who approach her through her work with the campaign on the facts about donation and transplantation. Now entering her second year as a Green Ribbon Champion, Sophia looks forward to remaining a role model for fellow students and community members.

“It has brought me joy to see how my community can rally around this cause,” she said. “My activism is starting conversations, and that is more than I could have ever asked for. To think this campaign has the potential to save even one life is more than enough.”

Watch Sophia tell her story in the video below: