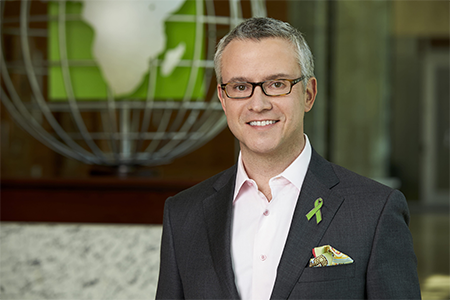 Now in his second year as a Green Ribbon Champion for organ donation, Jeff Jones continues to lead by example

WESTWOOD, KAN. (March 5, 2019) — It was a milestone year for Jeff Jones personally: 2018 marked the 15th anniversary of his father’s lifesaving kidney transplant, and Jeff’s first year as a Green Ribbon Champion for organ donation. You may have seen his face in ads and on billboards around the Kansas City area, in which he proudly proclaims he’s a registered organ donor before asking a very important question: Are you? 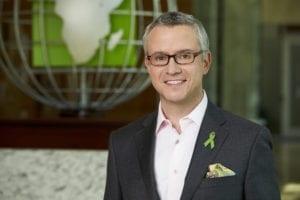 Now in his second year as a vocal advocate for organ donation, Jeff says it is an honor to be featured again in Midwest Transplant Network’s hope-filled Green Ribbon Campaign. “I joined the effort last year in part to honor my dad and his sister, who donated her kidney to save my father’s life,” he said. “This year, I hope to further accelerate awareness of the need for more registered organ donors in Kansas and Missouri.”

As president and CEO of H&R Block, Jeff is an inspirational leader focused on innovation. He is also passionate about local community outreach that improves lives. Jeff felt he could make a meaningful difference by sharing his family’s connection to organ donation and encouraging people to join the organ donor registry.

He was right. People instantly embraced his message as a Green Ribbon Champion. “When I first posted on social media last year, I was thrilled to hear from so many people willing to share their stores about organ donation,” Jeff explained. He heard from parents whose children were saved, from friends who didn’t know the story of his father, and from complete strangers who reached out just to thank him for giving his voice to such an important cause.

But Jeff says he’s far from the only one at H&R Block who leads by example when it comes to motivating others to join the organ donor registry. In fact, associates at the worldwide tax preparation service hosted their own organ donor drive at the company’s offices in Kansas City, Missouri – a collective act of kindness that makes Jeff beam with admiration. One associate is a living example of the power of organ donation after receiving a heart transplant. “I was incredibly proud that associates at H&R Block took this opportunity to make organ donation awareness ‘their own’ for their teams. I didn’t ask them to do that, but before I knew it, people were rallying to support the cause.”

“Thanks in part to the voices of Jeff Jones and all our Green Ribbon Champions, 2018 was a record year for organ donation in our community,” said Jan Finn, president and CEO of Midwest Transplant Network, the organ procurement organization serving Kansas and most of Missouri. “Due to the generosity of donors and their families, we facilitated 818 organ transplants to save the lives of grateful recipients.”

Equally important is the number of people registered as organ donors – the first step in giving hope and sharing life for nearly 2,500 Kansans and Missourians on the waiting list for an organ transplant. The wait can sometimes take years unless a living donor becomes available sooner.

“Last year, we received nearly 171,000 new and renewed registrations for organ, eye and tissue donation, and we are eager to keep the momentum strong,” said Finn. With the continued involvement of those who lend their voices to Midwest Transplant Network’s message – from hospitals and DMVs to donor families and transplant recipients, volunteers, ambassadors and of course, Green Ribbon Champions, Finn is confident it will be another great year.

Anyone can give hope and share life by joining the donor registry, regardless of age or medical history. The process typically takes under a minute and can be completed online at ShareLifeMidwest.com, or in person at the DMV when obtaining or renewing a driver’s license or ID card. For many, it’s a simple way to make a powerful difference. A single donor can save up to eight lives and improve as many as 75 more.

“Giving life is profound – and there is no easier way to give life than to become an organ donor,” Jeff said. “I love the opportunity to share with others how easy it is to do, and how powerful it is to save someone’s life through organ donation.”

Watch as Jeff Jones explains his family’s connection to organ donation/living kidney donation in this 2018 video:

April is National Donate Life Month: Are You a Registered Organ Donor?
Scroll to top