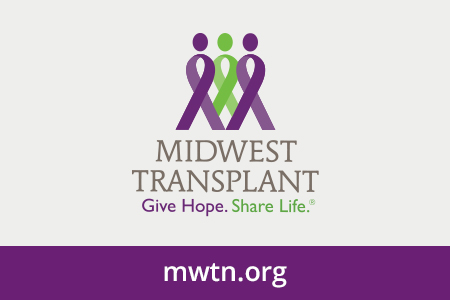 WESTWOOD, KAN. (October 8, 2018) — The number of registered organ and tissue donors in Kansas and Missouri has grown significantly in 2018. So far this year, Kansas has welcomed nearly 80,000 new registered donors, and Missouri has signed up more than 83,000. Leaders at Midwest Transplant Network, the organ procurement organization that serves both states, say this much-needed growth has been largely spurred by the power of the green ribbon.

Launched in April, the goal of the multimedia Green Ribbon Campaign is simple: inspire people to register as an organ donor, either online at ShareLifeMidwest.com or at the DMV when obtaining a new driver’s license or ID card.

Both outlets have seen impressive results. Website visits soared from April through August, climbing more than 480 percent over the same period in 2017 and increasing conversion from awareness to registration by more than 16 percent. Campaign materials hit DMV offices in July, coinciding with the busiest summer on record for the offices, which included the largest monthly increase in DMV organ donation registrations in six years.

Midwest Transplant Network plans to introduce more Green Ribbon Champions over the course of the multiyear campaign to continue delivering the lifesaving message. Watch for the newest champion to be unveiled next month – it’s a story you won’t want to miss.

“The message behind the green ribbon is resonating, which is wonderful because more registered donors will mean more lives saved and improved,” said Jan Finn, RN, MSN, president and chief executive officer of Midwest Transplant Network. “We are thankful to each and every person who has chosen to give hope and share life by becoming a registered organ donor.”

A single donor can potentially save as many as eight lives and improve up to 75 more through organ, eye, and tissue donation. To join the Kansas or Missouri donor registry, visit ShareLifeMidwest.com.

Midwest Transplant Network (MTN) has been connecting lives through organ donation since 1973. As the federally designated not-for-profit organ procurement organization (OPO) for Kansas and the western two-thirds of Missouri, MTN provides services, which include organ procurement and surgical tissue and eye recovery, laboratory testing and 24-hour rapid response for referrals from hospital partners. Midwest Transplant Network ranks in the top quartile nationally among OPOs, which reflects the organization’s quality, professionalism and excellence in partnerships throughout the region. For more information, visit mwtn.org.